Andrew Solomon, Ph.D., is a writer and lecturer on politics, culture and psychology; winner of the National Book Award; and an activist in LGBTQ rights, mental health, and the arts. He is Professor of Clinical Medical Psychology (in Psychiatry) at Columbia University Medical Center, Lecturer in Psychiatry at Yale University, and a former President of PEN American Center. 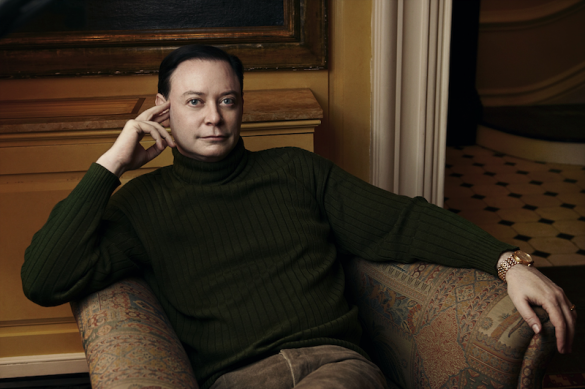 Solomon’s book, the best-selling Far From the Tree: Parents, Children, and the Search for Identity (Scribner, 2012), tells the stories of families raising exceptional children who not only learn to deal with their challenges, but also find profound meaning in doing so. Far from the Tree has received the National Book Critics Circle Award for Nonfiction; the J. Anthony Lukas Award; the Anisfield-Wolf Award; the Wellcome Book Prize; the Books for a Better Life Award of the National Multiple Sclerosis Society; the Green Carnation Prize; the National Council on Crime and Delinquency’s Distinguished Achievement Award in Nonfiction; and the New Atlantic Independent Booksellers Association (NAIBA) Book of the Year Award for Nonfiction. Following the publication of Far from the Tree, Solomon was also honored ith the Behavioral Health News Advocacy Award; the Felix Award; the Phoenix Award; the Elizabeth Boggs Leadership Award; the Thompson-Hine Diversity Achievement Award; and the American College of Neuropsychopharmacology Media Award. Far from the Tree was chosen as one of the New York Times Ten Best Books of 2012, and a best book of 2012 by Publishers Weekly, the Boston Globe, the San Francisco Chronicle, Salon.com, Kirkus Reviews, TIME, and Amazon.com; it has also been named a Book of the Year by the Economist, the Cleveland Plain-Dealer, and BuzzFeed. Far from the Tree has been translated into Chinese, Dutch, German, Hungarian, Italian, Norwegian, Portuguese, Romanian, Spanish, and Turkish, with numerous other translations forthcoming. Far from the Tree, a documentary based on Solomon’s book, premiered at the DOC NYC festival in November 2017; North American rights to the film have been acquired by Sundance Selects.

Solomon’s memoir, The Noonday Demon: An Atlas of Depression (Scribner, 2001), won the 2001 National Book Award for Nonfiction, was a finalist for the 2002 Pulitzer Prize, and is included in the London Times One Hundred Best Books of the Decade. The Noonday Demon has been published in twenty-four languages. It was named a Notable Book by both the New York Times and the American Library Association, and was recognized with the Books for a Better Life Award from the National Multiple Sclerosis Society; the Ken Book Award from the National Alliance on Mental Illness of New York City; the Mind Book of the Year; the Lambda Literary Award for Autobiography/Memoir; and Quality Paperback Book Club’s New Visions Award. Following publication of The Noonday Demon, Solomon was honored with the Dr. Albert J. Solnit Memorial Award from Fellowship Place; the Voice of Mental Health Award from the Jed Foundation and the National Mental Health Association (now Mental Health America); the Prism Award of the National Depressive and Manic-Depressive Association (now the Depression & Bipolar Support Alliance); the Erasing the Stigma Leadership Award from Didi Hirsch Mental Health Services; the Charles T. Rubey L.O.S.S. Award from the Karla Smith Foundation; and the Silvano Arieti Award from the William Alanson White Institute. In June 2015, a second edition of The Noonday Demon was published with a new chapter outlining recent developments in the science and treatment of depression.

In April 2016, Scribner published Far and Away: Reporting from the Brink of Change (later reissued as Far and Away: How Travel Can Change the World), a collection of Solomon’s international reporting since 1991. The New York Times included Far and Away in its list of 100 Notable Books of 2016.

In 1988, Solomon began his study of Russian artists, which culminated with the publication of The Irony Tower: Soviet Artists in a Time of Glasnost (Knopf, 1991). In 1993, he was invited to consult with members of the U.S. National Security Council on Russian affairs. His novel, A Stone Boat (Faber, 1994), the story of a man’s shifting identity as he watches his mother battle cancer, was a national bestseller and runner-up for the Los Angeles Times First Fiction prize; it has since been published in five translations.

From 1993 to 2001, Solomon was a contributing writer for the New York Times Magazine; he has also written for The New Yorker, Travel & Leisure, ArtForum, and many other periodicals, and has authored essays for many anthologies and exhibition catalogs. His journalism has spanned topics as wide-ranging as Chinese art, the cultural rebirth of Afghanistan, Libyan politics, video art, puppetry, and interior design. In 2003, his profile of the diarist Laura Rothenberg, “The Amazing Life of Laura,” received the Clarion Award for Health Care Journalism and the Angel of Awareness Award from the Cystic Fibrosis Foundation. In April 2009, “Cancer & Creativity: One Chef’s True Story” was recognized with the Bert Greene Award for Food Journalism by the International Association of Culinary Professionals; the story was also a finalist for the 11th Annual Henry R. Luce Award. Solomon’s reminiscence on a friend who committed suicide, “To an Aesthete Dying Young,” received the Folio Eddie Gold Award in 2011.

In August 2013, Solomon was awarded a Ph.D. degree in Psychology by Jesus College, Cambridge, Faculty of Politics, Psychology, Sociology and International Studies, working on maternal identity under the supervision of Prof. Juliet Mitchell.

Solomon has read and lectured widely at universities, professional conferences, and literary festivals, including the National Book Festival, the Hay Festival, the Hay Festival Cartagena, the FLIP Festival, the Edinburgh Book Festival, the Sydney Writers’ Festival, the Jaipur Literature Festival, and the PEN World Voices Festival. He is a frequent storyteller at The Moth, and has been featured on several episodes of The Moth Radio Hour on National Public Radio. Videos of Solomon’s TED talks, “Love No Matter What,” “Depression: The Secret We Share,” “How the Worst Moments in Our Lives Make Us Who We Are,” and “How Open Borders Make Us Safe,” have garnered over twenty million views, with viewer-contributed subtitles translated into more than twenty-five languages.

Solomon has made numerous appearances on television and radio, and is frequently called upon by the media for commentary on mental health, family, and disability issues.

An activist in the area of LGBTQ rights, Solomon is founder of the Solomon Research Fellowships in LGBT Studies at Yale University; Special Advisor on Lesbian, Gay, Bisexual, and Transgender Mental Health to the Yale School of Psychiatry; a member of the Board of Directors of the National Gay and Lesbian Task Force; and a participant in the Proud2Be Project. His articles on gay marriage have appeared in Newsweek, The New Yorker, The Advocate, the London Times, and Anderson Cooper 360. His July 2007 marriage to John Habich was reported in the New York Times, the London Sunday Times, Tatler, and Newsweek. The wedding ceremony that Solomon and Habich wrote for that occasion has been used as a sample text in a University of Pennsylvania Law School course on privacy and civil rights law.

In addition to his positions with Columbia University and Yale University, Solomon is a Distinguished Associate of the Centre for Family Research at Cambridge University. He is a member of the National Advisory Board of the University of Michigan Depression Center and Columbia Psychiatry; a member of the Board of Visitors of Columbia Medical School; a member of the Honorary Advisory Board of the Depression and Bipolar Support Alliance; and a member of the Hastings Center Advisory Council. In recognition of his contributions to the field of mental health, he has been awarded the Humanitarian Award from the Society of Biological Psychiatry; the Productive Lives Award from the Brain and Behavior Research Foundation; Yale University’s Research Advocacy Award; the GRASP Friend and Benefactor Award; the Fountain House Humanitarian Award; the Mike Wallace Award of the University of Michigan; the Columbia Psychiatry Gray Matters Award; the Ackerman Institute Partner Award; the Erikson Institute Prize for Excellence in Mental Health Media; Cold Spring Harbor Laboratory’s Double Helix Medal; and the Partners in Caring Inspiration Award from The Bridge.

Solomon lives with his husband, John Habich Solomon, and son, George Solomon, in New York and London and is a dual national. He also has a daughter with a close college friend. Habich Solomon is the biological father of two children with lesbian friends in Minneapolis; those children are also part of the family.