The Light of Derby 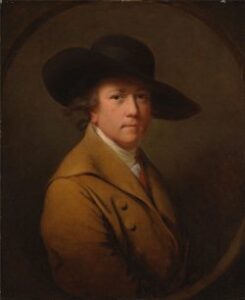 The nature of genius is more difficult to pin down than genius itself; it is easier to admire what you know to be great than to try to explain why it is great. And yet that second endeavor, neglected for most of this century, has lately risen to new heights of popularity. We have depended, perhaps for too long, on a binary picture of European art, the artistic acts of southern/Romance cultures criticized and categorized by northern ones, these cultures feeding off one another but remaining separate. Now the great northern literary/critical cultures — Germany, England, Russia — are rediscovering their artistic heritage, while the emerging critical bias of Italy, Spain, and France is being treated with increasing seriousness. In this liberal atmosphere, fresh judgments and reassessments have become commonplace.

If ever there was a nonvisual culture in historicist terms, England was it. Recent thought runs along revisionist lines, however, and the upsurge of appreciation of English painting that has been under way for two decades is blossoming like a magnolia in spring. The latest of its heavy flowers is the Tate Gallery’s exhibition devoted to the eighteenth-century painter Joseph Wright of Derby (a slightly abbreviated version of the show on view in London earlier this year will open September 9 at the Metropolitan Museum in New York). The cycle in which the advances of art historical criticism shake up the market and sudden advances in the marketplace stir up critics runs nowhere so smoothly as in Britain, and even there seldom so obviously as with Wright of Derby. Benedict Nicolson’s two-volume study on the artist, published in 1968, lifted him out of relative obscurity, but it was not until Wright’s portrait Mr. and Mrs. Coltman sold at auction for £1.4 million in 1984 that he received general acclaim as one of Britain’s foremost painters. The Tate show, curated by Judy Egerton, is both rigorous and selective, enthusiastic without any hint of absurd trumpeting. We are left with the Gazeteer’s remark, from a review of 1768, that “Mr. Wright, of Derby, is a very great and uncommon genius, in a peculiar way.”

Wright’s work divides into three categories, and the exhibition engages with all three. With his portraits (including conversation pieces), the artist supported himself; with his landscapes he indulged all his whimsy; but it was with his subject pictures that he did his most profound and original work, emerging as one of the first painters of industrial themes and as a great master of intricate compositions oddly lit. Wright’s work in all three genres grew steadily more complex with time. In the earliest portraits, faces smooth as ivory stare out from unarticulated or undistinguished backgrounds with that generic expression of boredom so common to those who sit for artists. But already in Mr. and Mrs. William Chase, of circa 1762-63, Wright has achieved genuine depth, the lively couple contained in a decorated room beyond which lies a feathery vista of clouds and treetops. In The Rev. D’Ewes Coke, His Wife, Hannah, and Daniel Parker Coke M.P., painted nearly twenty years later, the composition has become much more elaborate, the light stronger, the relations between subjects and background more intimate. The figures are now full of character, their relation to one another manifest in the position of a hand or the angle of a glance. In the latest portraits of the local intelligentsia, especially of John Whitehurst and Erasmus Darwin, Wright reaches a profundity of insight for which the earlier work gives us little preparation. The entire bent of personality, the fine-tuned modesty of Whitehurst, and the fleshy absorption of Darwin are unmistakable; the two men, vastly different, are given to us with all their flaws, but also with the power of their gifts.

The landscapes can be almost modernist in their schematic flatness, or they can penetrate across a carefully constructed series of planar spaces. Though some are done in a spirit of balance and repose, the traditional modes of landscape, others are vigorous and spirited. Always the primary concern is with light. In paintings like Landscape with a Rainbow, that light is carefully dramatized. In the best of his landscape paintings of Italy, Wright explored ideas of light by denying its usual sources (the sun, the moon) and substituting watery light reflected inward by the sea, the firelight of volcanic activity, and the man-made glow of explosives.

Similar issues inform the pictures for which Wright is best known. Four paintings of blacksmiths’ shops and iron forges and Arkwright’s Cotton Mills by Night mark Wright as the first important painter of industry, but as Judy Egerton rightly points out in her catalogue introduction, his preoccupation is with light rather than with the cause of industry. The paintings Wright called his “candle light” pictures, most of which are included in this exhibition, show the artist at his most original and are the ones for which he continues to be most famous. In both An Experiment on a Bird in the Air Pump and A Philosopher Giving That Lecture on the Orrery, in Which a Lamp Is Put in Place of the Sun, Wright depicts demonstrations by scientific experts for laymen. He is equally fascinated by the technical detail of the scientific event taking place and by the confused, distracted, and astonished responses of the audience. Light in each painting comes from a central source, an illuminated object in a darkened room.

There is a great deal of argument about Wright’s influences, but in these paintings it is clear that the Caravaggesque tradition — whether Dutch, Italian, or elaborately British — formed him more than any other. A Philosopher Giving That Lecture on the Orrery looks forward to the nineteenth-century preoccupation with the complexity of reflected light and its concern with the distorting character of artificial illumination. It is a painting that seems to burst with curiosity about its own subjects: about the orrery, about the light, and about the ways humanity itself is revealed when the focus of subjects is matched by the focus of the artist. Experiment on a Bird in an Air Pump, by Joseph Wright of Derby. Source: Wikimedia Commons.